On: Aug 05Author: adminCategories: In the News 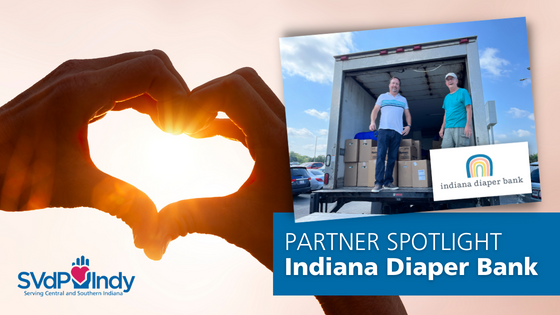 For families with infants and toddlers, diapers are a constant item on their shopping list. And with babies going through eight to 12 diapers a day, it’s a line item that quickly adds up. That’s especially true for the working poor or those living in poverty. For any family with young children, diapers are as necessary as food. Yet unlike with food, there’s no government assistance for those on the margin.

It was this realization that compelled Rachael Suskovich to establish the Indiana Diaper Bank in 2017. At the time, she had two children under two years old and both were wearing diapers. Rachael felt fortunate to be able to provide for her children’s needs—but she couldn’t help but wonder how families living paycheck to paycheck got by with limited resources and no public assistance programs.

She learned it was a significant unmet need. In fact, one in three struggle with diaper need. Those struggling generally find themselves short by about 25 diapers a month. With this new understanding, Rachael launched the Indiana Diaper Bank. She and a team of volunteers began sharing about the need and soliciting donations. The non-profit formed partnerships with local agencies as the primary way to distribute free diapers. By partnering with other nonprofit organizations—including homeless and domestic violence shelters, day care programs, foster care programs, children’s hospitals and food pantries—the Indiana Diaper Bank is able to serve more children and families. Additionally, they established drop spots throughout the city as another way to distribute diapers to those in need.

Today, the bank has a growing network of partner agencies. In July 2022 alone, the Indiana Diaper Bank distributed 52,000 diapers throughout Central Indiana via its partner network. SVdP Indy is proud to be one of those partners.

SVdP Indy began as a partner agency this summer. We get diapers once a month and distribute them to our neighbors on shopping days at the 30th Street Food Pantry. As volunteer Bill Richardson, director of intake at the pantry, says, the diaper program is an example of how we’re “helping our neighbors—no matter how small.”

“SVdP is a great partner for us,” says Ashley Burns, president and CEO. “They’re doing an amazing job already in the community. They’ve established relationships and can quickly identify those facing a shortage of diapers for their children.”

Burns says the diaper shortage can directly impact employment. Many of those working have children in day care. Day care centers require one diaper for every two hours. If a parent is short on diapers, they can’t bring their children to the center—which often means they can’t work. Not surprisingly, the current state of the economy has pushed many families’ disposable income to the brink. That means, the number of people that the Indiana Diaper Bank is serving has grown.

Providing families in need with free diapers can make a health, social and economic impact and influences a range of positive outcomes, including:

“Buying by the pallet is much more affordable,” she says. “However, like most everywhere else today, we’re faced with rising costs due to inflation and supply and demand.”

The Indiana Diaper Bank purchases about 2/3 of the diapers it distributes. If you’re interested in supporting the organization’s mission, visit www.indianadiaperbank.org/donate.

← The Impact of Inflation on Our Food Pantry