On: Aug 12Author: Theresa OwensCategories: In the News

There are several titles that Michael Darden was known by in life—husband, father, Vietnam Veteran—but the one he became known for at SVdP is the one that carries on with our ministry today. Michael became a Vincentian the day he was given a raggedy old bike by Maureen Mclean in 2008. He looked at the broken-down bike and asked for a tool to fix it. After fixing it, he offered to help fix the other bikes that were to be given to our poor, and often homeless, neighbors. That was the start of his ministry here—a program that we fondly refer to today as “Mike’s Bikes.”

At the time, we had no money to pay Michael, but we certainly needed his help. Rain or snow, he would show up to fix the bikes in Maureen’s backyard. Before long, the bike program moved to SVdP’s warehouse. Michael liked working on the bikes but kept to himself initially. He didn’t want to join others in the warehouse lunchroom. He simply stated, “There are some who are afraid of me—afraid that I might hurt them or steal something.” 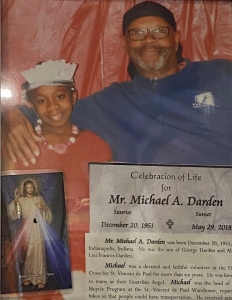 That changed with each interaction Michael made. One day, Michael saw the president of SVdP cleaning the bathroom. Michael told him that he could clean the bathroom instead because the president’s time would be better spent raising money. As they got to know him, Bill Wahlpole and others started asking Michael for more help, and he always agreed when possible.

Slowly, Michael began to feel part of SVdP and its mission. He began going to the lunchroom and connecting with others. Several women began referring to him as their guardian angel. Michael often stated that he would lay down his life for his SVdP friends. He found peace and joy here.

And everyone connected with SVdP’s bike ministry feels the same.