On: Nov 13Author: Shirley BoardmanCategories: In the News

Since the pandemic descended on the hills of Brown County, SVdP has worked to respond to the needs of neighbors who found themselves without income, food, transportation and ways to connect to resources. Concurrently, our efforts have been heavily shaped and supported by other agencies, churches and individuals who make Brown County their home or vacation destination. Although officially affiliated with St. Agnes Catholic Church in Brown County, SVdP has always been considered a community-based organization since its founding 30+ years ago by Sr. Mildred Wannemuehler, OSB.

Brown County, with a population of 15,000, lends itself well for neighbors to join hands with neighbors. Evidence of this has been the food pop-ups which have been largely organized by SVdP but generously implemented by dozens of others. As of the first week in November, more than 70 tons of food has been distributed. A Google drive is maintained to keep track of people who have offered help. Currently, it is populated by more than a hundred volunteers who have stepped up since the pandemic began. The list includes volunteers from every sector of the county: the YMCA, emergency response team, TRIAD, law enforcement, volunteer fire departments, school corporations, realtors, financial institutions, the Community Foundation, faith communities, Girl Scouts, trustees, the Visitor’s Bureau and the Cordy-Sweetwater Lot Owner’s Association.

Every week, more individuals and organizations join the effort asking how they can help. A number of individuals have stepped up to expand the proxy distributions to shut-in families. And when SVdP rolled out its annual back-to-school program—which served 357 students with $60 vouchers to be redeemed at Walmart—representatives of these organizations helped families whose vehicles were broken down, phones had been disconnected or where parents/grandparents were afraid to come out due to underlying health conditions.

When SVdP realized that food would need to be brought in to the county in larger quantities, a grant was written to the Brown County Community Foundation and Hoosier Hills Food Bank to install a walk-in cooler/freezer at the existing pantry. Funding was rapidly provided and volunteers together with help from other organizations such as Habitat for Humanity, reworked the lay-out of the facility to accommodate this new unit which allowed pallets of frozen and fresh food to be stored in preparation for large distributions. The walk-in unit was up and running in early August. 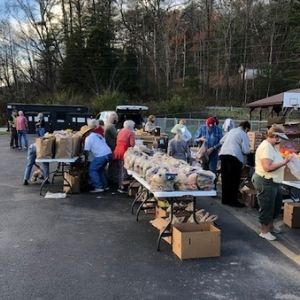 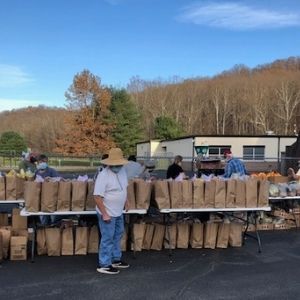 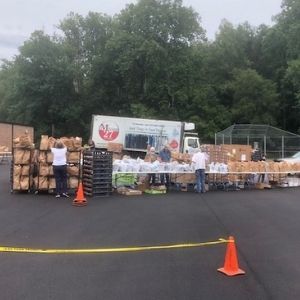 We soon recognized the need for a refrigerated truck and another grant was written to the Brown Community Foundation. Emergency funding was approved for SVdP to purchase a used vehicle for shared use in the county. After a nationwide search, a handsome 2011 25-foot Freightliner vehicle was procured. Additionally, pallet trucks are saving the backs and bodies of the volunteers. The truck made its maiden voyage the first week of October.

The SVdP food pantry at 2901 Long Lake Road continues to provide distributions on Mondays and Saturdays. Families can also receive personal care items, household goods, appliances and clothing.  At least two pop-up distributions are offered each month, typically one in the southern part of the county and one in the northern region. Recent distributions have cars lining up for as far as the eye can see and 140-160 households being served with thousands of pounds of food being distributed.

Now as the winter months approach, the board is mobilizing to deliver its annual Christmas celebration where typically the parents and grandparents of 400 or more children shop for gifts, personal care items, toys and clothing at the warehouse. Again, via an online scheduling system, reaching out to our community partners will be necessary in order to deliver this program in December which will require social distancing and extra care to keep everyone safe during the pandemic.

While 2020 has proven to be a challenging year for Brown County residents, it’s also showed us the strength of our community as we work together to care for one another.