The timing couldn’t have been more in sync.

On Thursday, August 5, Boulevard Place Food Pantry returned to its roots as an in-person grocery store, giving clients the ability to again choose the food items most desirable to them instead of the prepackaged service mandated by COVID. A single client opened the green client door and was greeted with a hug by pantry board chair Phyllis McNamara.

On Friday, August 6, the next day, the celebration got much bigger.

This time a crowd of more than 75 people—pantry supporters, advocates, volunteers, donors and community leaders—gathered in the pantry’s new warehouse and in the parking lot. They were in attendance for a grand reopening, ribbon-cutting, sculpture-signing and a tour (for those who had not seen all of the updates to the 3,800-square-foot facility). 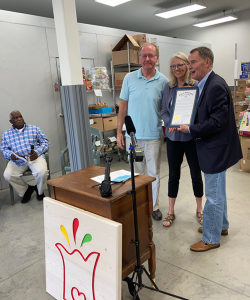 “It is a special celebration,” Hogsett told the crowd. “The fact that this renovation has taken place in some of the most difficult months in the history of the city of Indianapolis, these last 16 months, I know it was not easy to bring today into reality. You persevered throughout a year of trial, to bring and continue bringing, this oasis to a food desert.”

Planning for the pantry makeover got underway on a cold night in April 2018, with fundraising commencing and construction getting underway in fall 2019. Thanks to the generosity of Marian Inc. and members of the Witchger family (Marian’s ownership), along with more than 120 additional donors, the makeover totally modernized and expanded the facility at 4202 Boulevard Place.

There’s little resemblance to the original building’s heritage. It began as a corner gas station in the late 1940s and later became a mishmash of retail and office spaces. It was vacant in 2011, when the facility’s availability and potential caught the eye of the Society of St. Vincent de Paul supporters and members of five Catholic parishes: St. Thomas Aquinas, St. Joan of Arc, Immaculate Heart of Mary, St. Luke and Christ the King. They were looking to expand the small pantry in the basement of St. Thomas Aquinas when pantry volunteer John Juerling took notice of the vacant building.

The Boulevard Place Food Pantry, like SVdP’s Pratt-Quigley facility at 30th Street, is one of the larger client-choice food pantries in Indianapolis and a critical component of addressing food insecurity. (In 2020, the pantry served an average of over 900 households per month—a record. For six months during the crux of the pandemic, Boulevard Place served over 1,100 households a month.)

“The Boulevard Place Food Pantry‘s reopening is a wonderful example of community coming together,” said John Barth, a St. Thomas Aquinas parishioner and a representative of the neighborhood through the Indianapolis City-County Council. “I’m excited to have this important resource in District 7. The pandemic has made the need very clear and the Boulevard Place Food Pantry is here to address it.”

Rev. Sims kicked things off by stating, “We have all done our part to make this Boulevard Place Food Pantry a wonderful place.”

Bradford was enthusiastic about the transformation after he and Danita Hoskin, president of Crown Hill Neighborhood Association, toured the facility. The BTNA provided grant money throughout to pay for things like a new reach-in freezer and the automated garage door.

“Not only is the building beautiful, but it enhances green,” Bradford said. “From the argon-gas windows to the solar panels on the roof (scheduled to come) to the insulated garage door … I’ve been around this neighborhood 60 years. This was an old filling station and look at it today.”

During Ainslie’s turn at the podium, he fondly recalled the building’s purchase 11 years ago. He also wanted all to remember the words of St. Vincent de Paul, who was wise to connect prosperity with poverty.

Open my eyes that I may see the deepest needs of men, women and children
Move my hands that they may feed the hungry;
Touch my heart that it may bring warmth to the despairing;
Teach me the generosity that welcomes strangers;
Let me share my possessions with people in need.

“We are supported by so many denominations and faiths but primarily the Catholic Church through these five parishes,” Ainslie said. “The generosity of all these neighbors in sharing make those miracles possible every day, and it’s the time, treasure and talent of all of the supporters that makes this possible.” 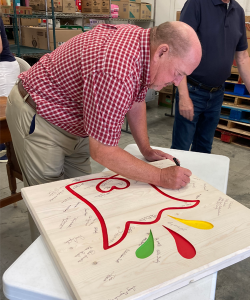 All those in attendance got to put their signature on a special sculpture that features Boulevard Place’s logo and its red, green and yellow colors. It will be at the pantry throughout August for all to sign. After some treatment of the wood, will hang in perpetuity on the walls to remind everyone that people drive the success of the pantry—in addition to the brick and mortar.

“We were intentional about the color green—it was a symbolic gesture to our clients,” said Brown. “This facility expansion is ultimately about them and servicing their needs.”

There were four ribbon-cuttings, and volunteers from The Church of Jesus Christ of Latter-day Saints held the ribbon.

The second group included Steve Shank, project manager, along with the crew from Marian.

The third group was Mark Varnau, director emeritus; councilor Barth; Rev. Varghese Maliakkal of St. Thomas Aquinas and Rev. Todd Riebe of Christ the King, who also brought a special framed painting of St. Vincent as a gift to the pantry.

The fourth group was made of 7 of the 8 members of the pantry board — Phyllis McNamara (chair), Bob White, Andy Pike, Tom Kelly, Barbara Hendrickson, Trinda Metzger, and Monica Foye.

There were also many contributors and vendors in attendance. Over 30 were part of the renovation, makeover and build. They included TEN By Kristen’s Kristen Murney (who worked on the building colors) and Mary Durkin of the Marion County Master Gardeners, which provided the native plants that provide a pollinator garden to the rear of the building (facing Ramsey Park), the interactive demonstration garden, and the flower boxes. We saw Patrick Breach, owner of PB Construction, whose company had a big hand in construction, demolition and carpentry. We saw representatives of Gleaners and we saw Jim Thieman, a SVdP driver and a favorite of the Tuesday off-load crew. We saw Amy Taylor, our volunteer coordinator and Peter Zubler, executive director of SVdP.

Pantry Director Brown thanked the “many, many” volunteers “who put the roof over our heads and the walls around us.” She singled out the supportive neighbors (including Hoagies & Hops, which lent us the use of their freezer during construction).

Brown pointed out that more work is going to occur, including installation of the rooftop solar panels, part of an energy-savings initiative implemented by the pantry board.

Here’s the new schedule for clients:

Drive-up is now one day a week from 10 a.m. to noon on Wednesday.