On: Sep 20Author: adminCategories: Homeless Ministry, In the News, Volunteers

For the fifth year in a row, Bob Wahlstrom has blessed local veterans and homeless individuals with bikes. This year, he helped donate 165 bikes to SVdP Indy. Bob, age 89, is the first to say he didn’t do this on his own. But it’s clear, he’s the main driver.

Bob, who drove a truck for SVdP for 20 years, first became aware of the need after talking with Maureen McLean at SVdP. As a veteran himself—of the Korean War—Bob immediately wanted to help when Maureen told him how SVdP collects bikes for veterans and homeless individuals.

“I’m still mobile and able to drive, and I can’t imagine not being able to get around,” he shares. “It makes me really glad to help fellow veterans who are in dire need of them.”

Bob, a long-time member of the Fourth Degree Knights of Columbus of St. Alphonsus in Zionsville, worked alongside fellow Knights from his church to gather bikes. The first two years, they were able to donate nearly 30 to SVdP. The third year, donations rose to over 50 bikes. And last year, thanks to help from WTHR reporter Emily Longnecker, more than 170 bikes were collected.

This year, Bob reached out to Fourth Degree Knights at St. Malachy in Brownsburg. He challenged them to join the St. Alphonsus Knights and collect bikes from their parish. Together, they collected 165 bikes—impressive any year, but particularly this year with bikes in high demand and slim supply. 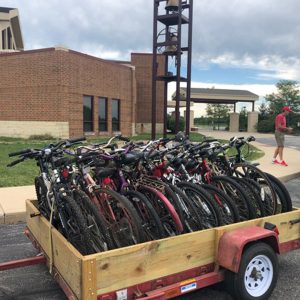 “I am so gratified by those who could help,” he says. “There were so many who were willing to step up and make donations.”

Bob’s particularly grateful for his team of volunteers, including:

Without a doubt, Bob shows us that we can be a blessing to others at any age! If you have a bike to donate, drop it off at our Distribution Center (1201 Maryland St. between) 8:30 a.m. – 4 p.m., Monday – Saturday. We’ll make sure it’s put to good use by someone who needs it.